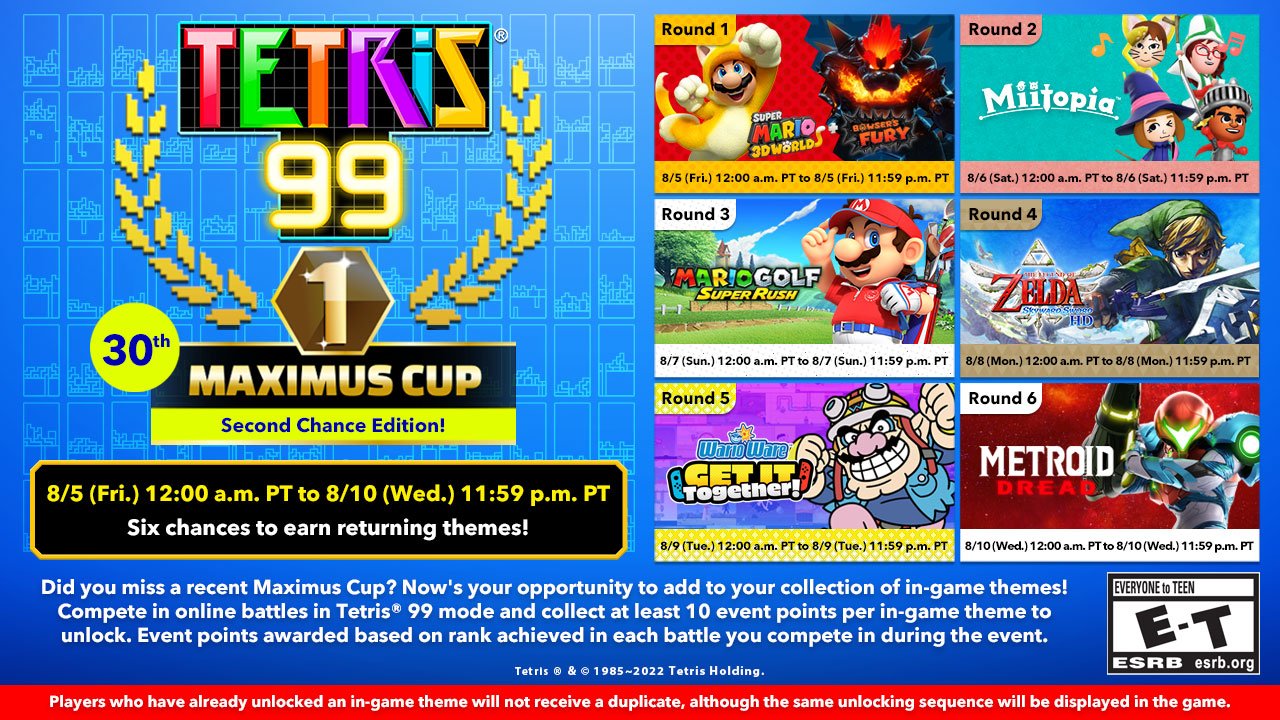 It's a revival! Compete to unlock iconic themes in the next Tetris 99 MAXIMUS CUP!

Now, as something special for both recent and seasoned fans in summer 2022, the Tetris 99 game on the Nintendo Switch™ system is holding its 30th MAXIMUS CUP. Don’t fret if previous events had you breaking a sweat! This is the MAXIMUS CUP for you. In previous MAXIMUS CUP challenges, 100 event points were required to unlock rewards, but the Tetris 99 30th MAXIMUS CUP lowers the requirement to 10 event points per Round, offering a curated selection of revival themes from past events. If you didn’t get a chance to compete when one of your favorite themes was active, now’s your chance to snatch it up!

To participate, you’ll need to be a Nintendo Switch Online member* and play the Tetris 99 online mode during the event period. You’ll earn event points based on your placement in each match. Once you’ve secured a total of 10 event points, a featured theme will unlock, which includes art, music and Tetrimino designs inspired by that Round’s featured game.**

In addition to Tetris 99, any Nintendo Switch Online member can also enjoy online play and the Save Data Cloud feature in a large selection of compatible games, along with access to over 100 classic NES™ and Super NES™ games, a smartphone app that enhances features of supported games, and the competitive online battle game PAC-MAN™ 99.

** Full version of game required to use DLC. Sold separately.

HAMSTER Co. is happy to announce that Tetris The Grand Master will be released for Nintendo Switch and PlayStation4 on December 1st, 2022, available digitally for Arcade Archives series by HAMSTER.

Enhance and Limited Run Games Team Up for Physical Release of Tetris Effect: Connected on Nintendo Switch, Xbox and PlayStation 4