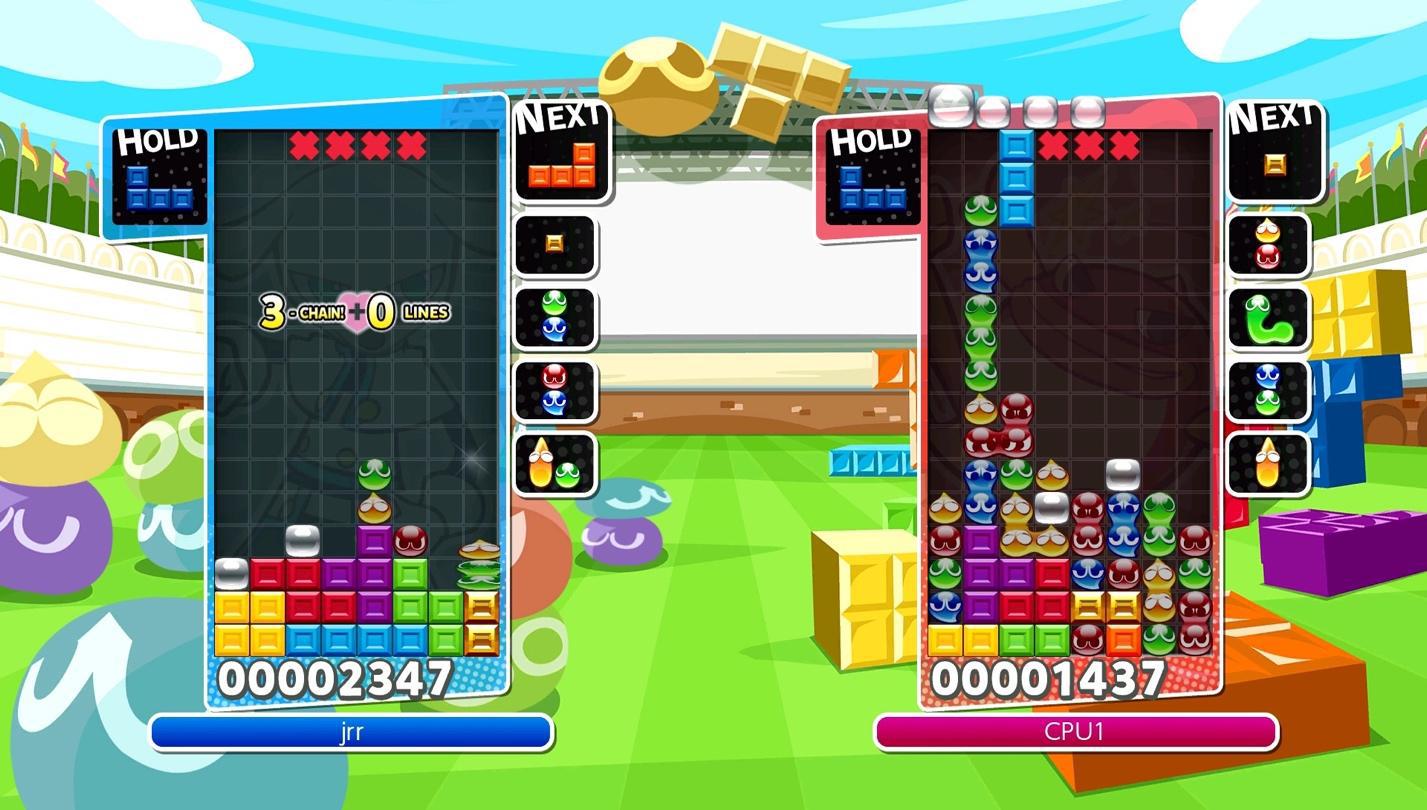 Puyo Puyo Tetris comes with a variety of modes to enjoy. Not only is there a story that you can unravel, but there are also several ways to test your puzzle gaming skills against other players. To help get you up to speed on the basics of each mode in Puyo Puyo Tetris, we listed them all below.

Adventure Mode is the basic story mode in Puyo Puyo Tetris that spans ten different chapters, each of which comes with ten unique stages.

Adventure Mode is great for learning the ropes in both Puyo Puyo and Tetris, and has a really cute story about how the characters from Puyo Puyo and the personified Tetrimino characters meet up.

You get to see their interactions with one another and how they battle. If you’re not sure where to start, Adventure Mode is great for both beginners and pros.

Versus Mode is the standard multiplayer mode in Puyo Puyo Tetris, where you can challenge another player online or local (in person).

Essentially, you can choose to play either Puyo Puyo or Tetris depending on which one you’re the most comfortable with, and the same goes for your opponent. The rules of Versus are simple as long as each player knows the rules of the respective game they choose.

You want to beat your opponent by clearing lines or Puyos faster than he or she can, sending more Garbage to their side of the screen until they can no longer stack/clear Puyos or Tetriminos.

Swap Mode is somewhat similar to the aforementioned Versus Mode, except you play both Puyo Puyo and Tetris. The modes will switch for both you and your opponents every 25 seconds.

In order to be successful, you’ll need to remember what moves you made and want to make in both games, so you can be ready when the swap occurs.

To win, you must send Garbage to your opponent’s side of the screen until he or she can no longer clear/stack Tetriminos or Puyos.

Big Bang Mode is chaotic because both opposing players face off using both Puyo Puyo or Tetris. However, it differs from Versus in that your victory is determined by how well and fast you play.

The goal of Big Bang is to get a higher score than your opponent by clearing your Matrix the fastest. At the end of one minute, the Garbage generated by each player will get sucked into a black hole and then explode, dealing damage to that person’s life bar.

The player who survives the longest wins.

In Fusion Mode, you’re able to use both Puyos and Tetriminos at the same time on an 8x16 Matrix; it’s really unique in that Tetriminos can smash through Puyos.

Fusion Mode may be hard for new players, but after you play a few rounds, you should get the hang of how the Puyos and Tetriminos interact. Of course, if you’re looking for a little practice, you can always head to Endless Mode to play on your own and hone your skills.

Party Mode is where you can face off against others while taking advantage of items (both good and bad) to give you an edge and/or make your opponent’s game harder.

To activate an item, you’ll need to clear a line in Tetris or chain in Puyo Puyo near the item to activate it. Similar to other modes, you can pick between Puyo Puyo or Tetris depending on which one you’re the most comfortable with.

The effects of the items will either apply to you or your opponent(s). For example, there’s one that creates a searchlight and makes it harder to see where you’re placing Tetriminos. The Party match takes place over two minutes, and the player with the higher score at the end wins.

Challenge Mode is the basic single-player section in Puyo Puyo Tetris that’s great for practice or to relax, since playing through some of these single-player modes is a great way to unwind.

In Challenge Mode, you can choose between different variants of Tetris or Puyo Puyo depending on which one you want to play.

There you have it, all the modes in Puyo Puyo Tetris! Now all that’s left is to jump into the game and try these out for yourself. Good luck, and have fun playing the game.